It has been very rightly said that women are the true architect of the society and it aptly applies to Shaveta Athwal, who won the prestigious title of Mrs India – She is India 2017, the most prestigious pageant for married woman in India and also the official license holder for Mrs India Universe. 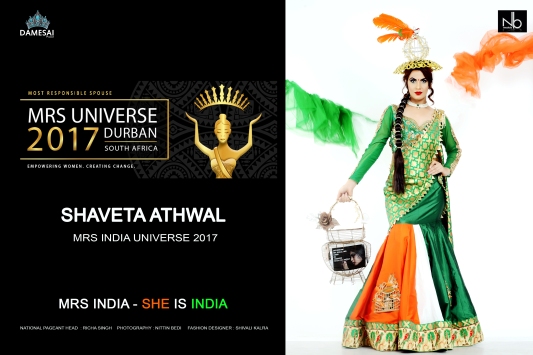 Shaveta who is an image consultant by profession and Social worker and model by passion,won the coveted Crown of Mrs India-Universe 2017, leaving behind 29 strong contestants shortlisted from different sates of India.The pageant was a four day celebration of the most brave, bold and beautiful married women of India who came together to support the cause of creating awareness against Domestic Violence,the platform for the pageant. The honour of creating this massive platform goes to Richa Singh, a former Mrs India herself and also the first Indian to have won the prestigious crown of Mrs Universe-Intelligence 2015.She has been newly appointed the India Pageant head by Mrs Universe ltd. Shaveta Athwal is proudly representing India as MRS INDIA-UNIVERSE at MRS UNIVERSE 2017 in Durban, South Africa.

Shaveta,who is a strong willed and an optimistic person whose life motto is to infuse positivity, gravitas, happiness and success in one’s life by boosting their morale and helping them discover their inner strengths and self -esteem. Convictions, beliefs, value for time as well as for personal growth & constant contribution for others are her driving force. She was born & brought up in a calm nd quiet city of Haryana , India and her strongest motivation is her family which enlightens her with love and inspiration. 2017 came as a bliss to me where she got an opportunity to be associated with a unique platform that was entirely about empowering ‘Women Empowerment & Saying No To Domestic Violence’ ” Mrs India – She is India” which was held in Delhi, The Umrao from 27th May to 28th May 2017. Her grit, force of determination & self- belief made her win the coveted ‘Brave, Bold & Beautiful Mrs. India universe ‘ crown and added a gleam and shine to her life and now she is focusing all her energies to bring the prestigious Mrs Universe 2017 crown to India for the first time ever.

Being a topper in academics( Masters in computer science) She has always made her parents proud followed by being a perfect wife and a good mother to her Son. She has been successfully able to shoulder the responsibilities of homemaking and motherhood and now being at a platform like this she is working hard to make her nation proud. She has always learned to help people in one or the other ways as she believes that their blessings and her good karma placed her on such a huge platform of pride and acknowledgement. she is now determined to creating awareness about the cause of’ Domestic Violence’ Women are the nurturers of life and to see them subjected to violence makes her heart bleed because she feels the prosperity of every society is reflected in the image of its women.There are countless women who struggle to live a life of dignity. Their existence is scarred with grief and pain thus it is not only a privilege but also her prime duty as Mrs India 2017 to stand at such a great platform and speak for them and be their voice….. the power of dignified existence that every human being is born with.”Respecting every soul and empowering each women is her mission so that their life is filled with smiles and compassion”

Support her journey to bring the Mrs Universe 2017 crown to India and to hold the national tri colour with pride at the WORLD FINALS OF MRS UNIVERSE 2017 at ICC in DURBAN, South Africa.