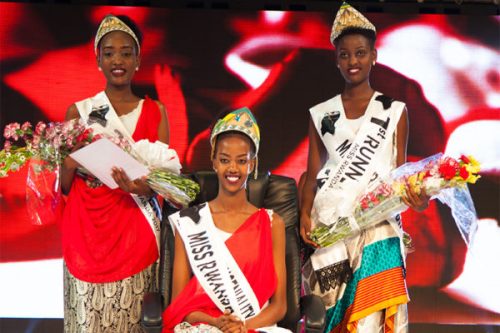 Elsa Iradukunda was crowned Miss Rwanda 2017 beating 15 finalists on February 25th, in a glittering ceremony held at the Kigali Conference and Exhibition Village. Guelda Shimwa emerged the first runner up, followed by Linda Umutoniwase, 20. Queen Kalimpinya, 18, emerged the third runner up, while Fanique Umuhoza Isimbi, 18, emerged the fourth runner up of the contest.

Elsa apart from winning the crown took home a brand new Suzuki Swift worth Rwf15 million, courtesy of the main sponsor Cogebanque, a local bank. She will be getting a monthly salary of Rwf 800,000, according to the organisers, among other perks.

For the first time in the history of Miss Rwanda pageant, all the 15 finalists were given full scholarships to pursue undergraduate degrees at Mahatma Ghandhi University.

Elsa will be representing Rwanda at the Miss World competition this year. She will the second Rwandan to participate in the prestigious pageant. The first time Rwanda participated in Miss World  was in 2016.