Miss World Samoa – Latafale Auva’a (Why she is my favourite)

Never would I have imagined I would be so impressed with Miss World Samoa and I would be following her. How I came to know of her was through that incident that made headlines a month ago. I thought she was very brave to speak her mind and do what she thinks is best not just herself but for her community as well. Then Miss World happened and I saw her Introduction video which was recently released. I immediately love her. It was delightful to watch her and her soft calm personality yet looking so positively cheerful and lively. Then I started looking up for her on the net. I was pretty much amazed at her achievements and her profiles. She represents a beauty that is not just about physical beauty, but about the mind, the heart and the soul that inspire and empower people to know the real meaning of true beauty.

Latafale Auva’a is not new to beauty pageants. She has won all the pageants she entered. The 21-year-old is the reigning Miss Samoa New Zealand, Miss Samoa and Miss Pacific Islands. At the Miss Pacific Islands, she won all the major titles such as talent competition, an on-stage interview, best sarong and best traditional wear. That is quite a big achievement. At the Miss World 2015 contest, she is there to represent the women of Samoa and her community with pride and give them a platform and recognition through her in the best possible way she can. She believes her participation in the contest will help promote Samoa and other Pacific islands. This is true for sure. In a big platform like Miss World, putting your country in front of the other world brings recognition. I know for a fact that there are still people who don’t know how many countries are there in the world. Beauty pageants are one way to put your country out there on the world map. And she is doing it for all the right reason. This is the best platform she can get for a beauty like her and where her purpose of being beautiful can be showcased in front of millions of people. Latafale plans to represent the Pacific Islands with pride by wearing clothing by Samoan designer Afa Ah Loo.The designer recently displayed his designs at the Fiji and LA Fashion weeks.

Apart from these, Latafale is also a multi-talented woman. She can sing, dance and is a sportsperson. In July, 2015 she also competed for Samoa at the South Pacific Games, in Papua New Guinea, as part of the mixed touch team, which went on to win the gold medal. This explained her 4th place achievement out of more than 100 contestants competing at the Miss World Sports Challenge event held recently. It doesn’t end here. Latafale has also represented New Zealand in singing through the New Zealand Secondary Students’ Choir and is a member of the National Youth Choir. She competed for New Zealand and demonstrated Samoan colours in the World Championship of Performing Arts in Hollywood in 2013. Currently, she is among the top 30 semi-finalists for the Miss World talent round competition. Being a dancer and singer comes to an advantage for her in this contest. If people have heard her singing, they will be quite surprised to know she can sing really well and has the voice to hook you into her. It’s quite an irony that I came across her singing on YouTube. I was searching for one of the songs I love to listen “With You” from the Broadway show – Ghost the musical. This Broadway is the same as the movie “Ghost” which stars Demi Moore and Patrick Swaze. ‘With You’ is one the few songs that makes me emotional every time I listen to it. There is so much of emotions and soul-stirring in this song with its powerful lyrics that it emotionally laden me sometimes while wanting to hear it again and again. That’s how I came across Latafale Auva’a cover of ‘With You’. Listening to her version was almost the same as the original – the same emotions, the same passion that is in the song. Such a heart rendering cover by her! The chorus of the song especially when it comes to the part ‘You….’ is so touching. I can’t say anything more than that. Just hear her sing that song or the original one. You won’t be disappointed. She also covered Alicia Keys’s “If I ain’t got you’ and she did it so fabulously. The talent round is going to be tough for sure and who knows she might just win it. I would love to see her sing “With You” on Miss World finale stage. It would be so amazing and I can vouch that the world will like her. 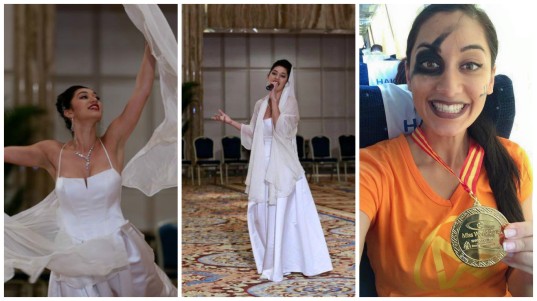 Talent round and Sports event

Latafale is third-year law and music student at the Otago University in New Zealand. She has starred in Otago’s latest television commercial. Outspoken, brave and courageous, she is not afraid to speak her mind. Having lived most of her life outside Samoa, she accepts openly not being fluent in Samoan and she is not the only one. There are thousands of others too. As a representative of Samoa, she has been criticized for it, she took it in her stride and defended the thousands of people like her which many young Samoan praised her for her stance and saw in her a representative, a leader who they can proudly present within and outside her community. She said, “To those who believe being Samoan is based purely on speaking the language, I challenge you…You deny your heritage when you don’t acknowledge that you’re Samoan NOT when you cannot speak it.”

As someone the young generation can look upto, she is doing her best to help and bring change in her nation and the pacific islands. She knows she has expectations from her own people and she is working hard as a title holder of three crowns as a way of giving it back to its people. It would be wrong to say she is doing it just because she has been given the platform.  Even before winning those crowns, she has already demonstrated the quality of being a beauty queen through her work, education and her strong leader like personality. She has partnered with several NGOs whose efforts are focused on the region, participated in roundtable discussions on youth issues, and connected with the Samoan Conservation Society to support environmental efforts. Through her own initiatives, she has served in village schools systems set-up by various non-profit organisations as Youth With A Mission, Samoan Victim Support Group and ‘Fortress of Faith’ Prison Ministries.

Not only as beauty pageant title holders but as a person, she has shown class, humility and grace. When she speaks, she embodies beauty that is not on outer appearance but from within and exhibit it through her confidence, her dreams and goals for the place she comes from, her eloquent speech, the way she carries herself and the way she shows it all through her eyes. She might not have the blessings of her country Prime Minister; she is taking part in Miss World Contest with the hopes, prayers and blessings of thousands of her people who believe in her dreams and goals. “True beauty is in the humility of character and in the kindness of heart,” she said. “In the giving to others and in innocent laughs. It’s mostly summarized in someone knowing who they are. Don’t base your standards of beauty on magazine snippets. Dare to be you – wonderfully created”, she wrote on Movement Modesty website which urged people to look for real beauty.