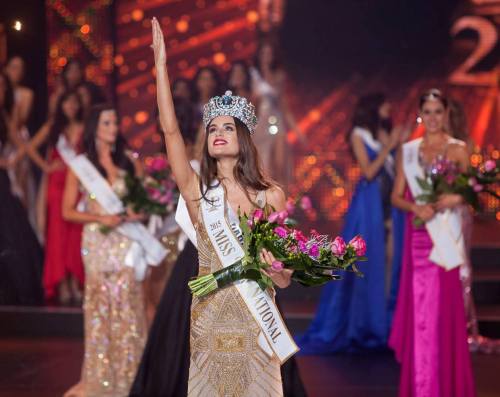 The show opened with a parade of the nations introduced by the two host hosts of the night and the contestants danced to the song of LMFAO – Party Rock Anthem ft. Lauren Bennett, GoonRock. I thought it was brilliant. The girls dancing to the groove of the music in their national costume was fun to watch and they seemed to enjoy themselves so much without thinking about the competitions. It was great to see them having a light-hearted moment through that song. The girls were introduced continental-wise. The choreography was great without being too loud, but the introduction of the contestants after each continent could have been done better like they should have directly zoomed into the next continent instead of the two hosts – a former beauty queen, Davina Reeves and Polish journalist Maciej Dowbor, taking some extra seconds to introduce the girls from the next continent. It kills the excitement somehow. Nevertheless, once the girls were introduced again, the excitement level was up because of the good choreography and the excellent choice of the song. If the girl had introduced themselves that would have been better.

Some impressions of mine from the introduction round were: I am not too familiar with Belgium cultures though I try my best to keep updated with world cultures. I love the satanic costumes of Miss Belgium. It reminds me of Mister Belgium costumes at Mister International 2015. I don’t know the significance of the costumes but time to add some more knowledge about Belgium. I think I will love it. Gibraltar’s Pirate costume made me miss the movie ‘The Pirate’s of the Carribean.’ Norway had a Viking costume which made her looked a strong feminine character from a superhero movie. Georgia was lovely. She looked every bit of a beautiful Prince. Estonia looked so gorgeous. Most of the candidates from Europe impressed me the most. 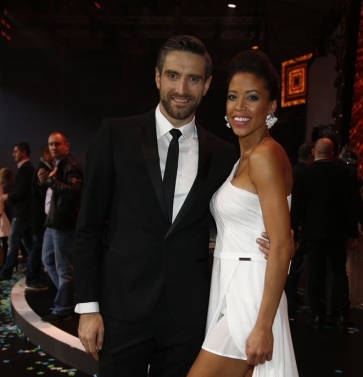 After the break, the popular Polish rock band, Golec uOrkiestra performed their original song ‘Crazy is my life’. The song was very energetic and a performance worth watching. While the band was performing on stage, we saw the girl enjoying and dancing to the performance backstage. Next was swimsuit round. The contestants wore a two piece swimsuit in different colours, some were in pink swimsuit covered with a same coloured sarong, some were in green, some were in yellow and some were in a mix and match colour swimsuit like Pink swimsuit with a blue sarong. All the contestants took the centre stage walking the ramp to the background score of Taylor Swift – Shake It Off. Again, another great song choice for the background score. I thought each girl will be introduced again or they will walk on stage individually after some time but that didn’t happen. Some funny thought came to my mind. Every time I see yellow colour in beauty pageants, I am reminded of the Jeannie Mai who popularised ‘Yellow is the colour of Joy.’ This time too, I was laughing on seeing the yellow swimsuit while thinking of her. I love Jeannie Mai. It would have been cool to have her here in Miss Supranational.

We got to see another performance by Mirami singing ‘The Party’ll never end’ in between the rounds, good song and a lively performance but by this time, I thought it was getting a bit too much for a pageant. And it looked like some Music Award night.

Then, Indonesia, Mexico, Estonia and Spain who were winners of the pre-event special awards, were on stage. Mexico was the winner of Miss Fashion City. She was asked what was her impression about the contest. She said that it was amazing and a great beginning for all of them as it was the first time they were on stage at Miss Supra National contest. Indonesia who won Best in national costume was asked about the snow which she never had seen before and whether she tasted it. She replied she was excited to see the snow since there are only two weather i.e. hot and rainy weather in Indonesia. Estonia had won Miss Moto and was asked if it was the first time she had seen a fast car. She replied in affirmative and added that it would be cool to see a fast car combined with snow in her country. Spain was asked what it meant to have won Miss Warsaw expo. She said she was honoured to be Miss Warsaw.

Another show again. It was cocktail round and this time all the beautiful contestants walked the stage in their cocktail dress to the song of Christina Aguilera’s ‘CandyMan’,  Misses Indonesia, Estonia, Mexico and Spain who were already on stage in their cocktail dresses opened this round. And were joined by the rest of the contestants. Some of the girls who stood out for me in terms of their presence, catwalks skills or how they work out their dress though some had not so good cocktail dress were Mexico, Estonia, Spain, Dominican Republic, Jamaica, Panama, Paraguay, US, Ghana, India, Myanmar, Malaysia, Philippines, New Zealand, Albania, Belgium, Czech Republic, Denmark, France, Georgia, Iceland, Malta, Netherlands, Poland, Russia, Scotland, Slovak Republic and last but not the least Ukraine.

It was time for the top 20 announcement. Those who made it to the list were Australia, Paraguay, Iceland, Canada, Mexico, Colombia, Panama, Slovak Republic, India, Malaysia, Japan, Czech Republic, Philippines, Belgium, Rwanda, Poland, Jamaica, US, Kenya and Myanmar. A good top 20 I would say without any surprised. I wasn’t surprised at all. All these beautiful ladies deserved their placement.

The top 20 finalists now moved on to the next round called Black and White. I wonder what it would be. Thought it will be a gown segment but was surprised to see them in swimsuit performing cabaret style to a song ‘Let me think about it’ by Wild Child. They all looked smoking hot.  After this round, we saw a Polish singer Margeret singing ‘Heart Beat.’ Once that was over the top 20 were up for another round ‘Red dress show.’ The host Davina interacted with few of the contestants backstage. I love when she told them 10 more girls will be joining which means that top 20 will be cut down to top 10. The way she said it was pretty funny though it might look harsh and a bitter truth but I thought there was humour in it. For the next Red themed round, each contestant got to have some extra seconds coverage walking on stage in her red dress. Australia was just amazing. Belgium looked gorgeous. Canada: a goddess with a killer look. She had one the best face in the competition. Columbia looked good but lacked energy, didn’t quite live upto expectation. Czech Republic had a presence and she got the moved too. Iceland shined like an angel and she can thank her beautiful face for it. India was so full of life on stage. Such a strong personality she had. Jamaica was so fun to watch. Tall and beautiful, she carried herself well. Japan came across as cold and looked heavy. She almost tripped in this round. Kenya followed next. So glad that she made it to this round but she was pretty much ok for me. Neither outstanding nor the worst. Malaysia looked sexy and she made the background song like it was for her only. Mexico cheery attitude was what I like about her – a beautiful, sensual woman. Myanmar was all about fun on stage. She was appealing to watch. Panama – one of the favourites, was full oozing with confidence. Paraguay – she had an impeccable presence and a queenly aura. Philippines did justice to her sash. She gave a good performance but it wasn’t exceptional. Poland, one of my favourites, was sweet and beautiful but didn’t live upto my expectations. Rwanda – I was so happy to see her in the top 20. I really like her. Slovak Republic looked angelic and calm. US was good in both the rounds though I didn’t expect her to move further.

The top 20 were cut down to the top 10. Australia, Canada, Colombia, Iceland, India, Malaysia, Mexico, Panama, Paraguay and Slovak Republic made it to the top 10. The 10 finalists had to compete for evening gown round. The background music used in this round was Chandelier by Sia. The song choices for different were excellent. Australia started the round in her pink gown. Canada reminds me of Natalie Glebova. She was stunningly beautiful and so vivacious. Colombia had a very high energy but her catwalk wasn’t impressive. Iceland wore a ball gown which looked so great on her. I love that gown. India chose to wear a golden gown. It looked similar to what Miss Grand India, Vartika Singh had worn in the evening gown. Malaysia had blue and black combination gown. She carried it so well but I didn’t like the gown especially the colour combination. Mexico was simply outstanding. Such a beautiful woman with a strong personality yet very soft. It’s so pleasing to watch her. Panama was more like she was walking for a fashion week. She looked every bit of a supermodel. Paraguay wasn’t to be left behind. She had such a strong presence and such a queenly aura that only the crown was missing on her head. While going back, she almost tripped. Slovak Republic wore a red gown and she looked red hot. She carried it in style. 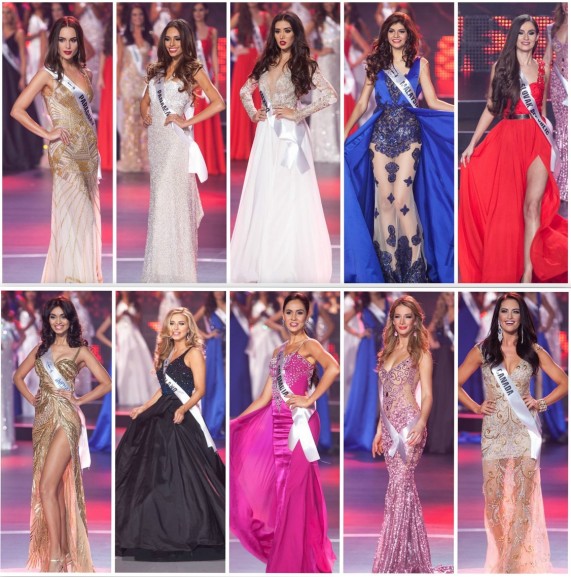 Slovak Republic: I’ll to do my best but first of all, I’ll run to my boyfriend.

Paraguay: Really relieved. I will eat chocolate all day.

Panama: If I win, I will stay in Poland to become a top model and work hard.

Mexico: I would be the happiest woman in the world.

Malaysia: The first thing I would do is scream out loud, go crazy and jump out of the stage.

India: I’ll do a massive Bollywood dance with one billion people back home and all of you here at Miss Supranational.

Iceland: I would be really happy and I’ll spread love and education across the world.

Colombia: I would talk about values and qualities fo a woman and this pageant is not only about beauty.

Canada: I would show to people that being a title holder is about being a leader both nationally, internationally and not just pageantry, but with everyday life.

Australia: I would do my best to be a good role model around the world. But first, Pizza.

Listening to their answers, I thought it was just about having a fun and honest conversation just like what the show was about. Almost all the contestants gave a short and their own individuality answer which was good. All were spontaneous and they in turn made the contest looked so easy and light-hearted.  Canada, Iceland and Australia gave an answer that everyone expected to hear like the 90’s answer. I have no doubt that they will do it had they won. Love the way Miss Australia ended her philosophical answer with a humorous touch – Pizza. Miss Paraguay chocolate answered was just like Miss Universe 1997 Brooke Lee. Miss Slovak Republic was fun too. When I heard the word ‘run to’, I thought she would say her family, but she instead chose her boyfriend. That was very honest and loved it. Malaysia would have really done the same through her winning reactions.

For the Continental Awards, it was so cool to see Mister Poland International  2015, Rafal Jonkisz on stage and giving away the awards. 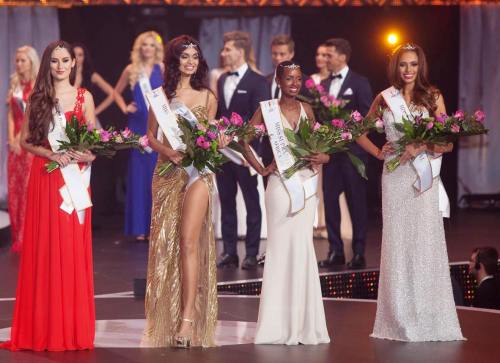 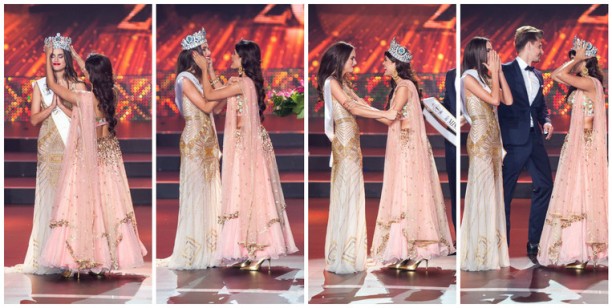 Along with the prestigious crown the contestants also competed for the various sub contests. The winners of the Miss Supranational 2015 sub contests are as follows.

Congratulations to all the gorgeous winners.