In a very glittering and glamorous event held in Mumbai, Urvashi Rautela from Uttarakhand was crowned Miss Diva 2015 who will represent India at Miss Universe 2015 to be held later in December. Natasha Assadi from Bangalore was crowned 1st runner-up while Naveli Deshmukh from Aurangabad was crowned 2nd runner-up. Urvashi was crowned by Lara Dutta since last year winner, Noyonita Lodh couldn’t be there to crown her successor but she had a special message for the winners shown through a video.

The show was formatted into Tv reality series for 30 minutes. There was glitz and glamour, the stage though small looked good and colourful. What I really don’t like about the show is that though it being a 30 minutes show, everything looked so haste and there was too much of editing done which was easy to make out. It was like everything was rush up and done to meet a deadline. That kills the excitement. But being a pageant fan and ardent supporter of some of the contestants, I had to watch it. I somehow enjoyed it because in the end we got to already expected winner. The rest were just fighting for the runners-up spot.

The finale night show was broken down into two episodes where in the first finale episode the finalists ramp walked in Gavin Miguel collection for the sub-contest ceremony. They all look beautiful and breathtaking. The winner of various sub-contests was announced.

In the 2nd Finale episode, the 11 finalists who survived eliminations in the previous episodes walked the ramp in a special collection of Shantanu and Nikhil.  The top 6 were called on to the stage. I was surprised to see Hida Siddiqui being excluded from the top 6. Thought she deserved to be there. I had made my top 5 choices for the crown. In place of Hida, Natasha Assadi and Aishwarya Dhavale made it to top 6. I had both of them in my top 7 list but had excluded them for my top 5 choices. Anyway coming back to the finale show, Cyrus Sahuka as a host did a fabulous job. It’s sad we couldn’t see much of his hosting skills due to cuts and edits. The top 6 with my review of them during the finale follows: 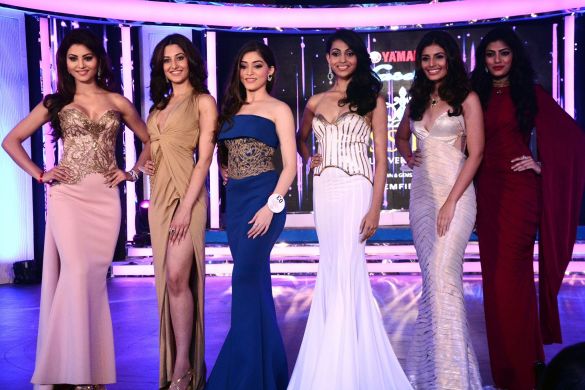 Aileena Catherin Amon: She looked so good in motion. There was energy and spunk in her. Her youthful attitude and enthusiasm were just too good. I am a big fan of her. It’s a great achievement for her that she won three sub – title award.

Aishwarya Dhavale: She was so beautiful in the blue strapless gown. The blue gown with her fair skin tone compliment each other and made her looked bright, pleasantly clean and cool. It was amazing to watch her.

Hemali Soni: One of the prettiest face and most photogenic. I love her gown. She had one the best gown. The gown was simple but very amazing. It suits her personality. She was full of life and loved her smile. She has got a personality that catches you instantly. It would be nice to see her back in pageants.

Natasha Assadi: Fresh, energetic, positive attitude and peppy. She definitely deserved to be in the top 3. I love her confidence and intelligence too. She has everything to be a beauty queen. And she knows it. But she doesn’t show any air about it. That’s what I love the most in a beauty queen.

Naveli Deshmukh: She really knows how to handle herself in front of the camera. She looked so calm and soft. The red gown she wore wasn’t the best for her but she carries it so well. Anyway, she still looked beautiful. The gown reminds of Lopamudra Raut.

Urvashi Rautela: Everything about her is all star. Rightfully so. She walked like she owned the stage. She has everything in her to make her a Diva. She got the move, the confidence, the attitude and a right experience that doesn’t shout but show us calmly with her beautiful smile and her appealing personality.

Next, the question and answer round. Some were witty, some didn’t make sense and some make us laugh. Here it is.

Urvashi was asked if she could be anyone in the world who it would be and why.

“I think I rather be my own self. Considering as a person, I am extremely proud of my upbringing and I am very very proud of the way my parents have brought me up. As Lara once said, you know, “you should have a strong sense of individuality.” So considering that I definitely feel that I would be myself.”

Natasha Assadi picked Nikhil. Nikhil asked her If she didn’t win the contest what she would do and what her plan was.

Aileena got Kangana Ranaut who asked why she should win the contest over other.

“I believe I deserve to win this title tonight more than anyone else because I’ve always been a dreamer, believer and a go getter. And that is the sole reason I am standing here today and my ambition is driven by determination, passion and dedication. And that sets me apart.”

Hemali had Shantanu asked her what men could learn from women.

“I think the first thing men should learn from women is loyalty. Second would be compassion and I think they should start becoming more understanding toward women and other things around them. They are always in their own world. I mean they act immature sometimes. So they should start learning to be mature. So yeah, that’s it.”

Naveli picked Irfan Khan who asked her whether she would like to be born as an animal or bird and why.

“I would choose peacock because it’s our national animal, Oh sorry bird, and it’s our national bird. It’s very beautiful and it enjoy when it rains and is close to nature. I am the person just like a  peacock. So I would go for peacock”

If I were to choose my top 3 based on question and answer alone, it would be Natasha, Aileena and Hemali. But this is a beauty contest, especially for Miss Universe contest. In the end, it had to be looked in totality and I am happy with the result. Urvashi deserves every bit of it. She is the best India can send right now. She is already making wave around the world. Can’t wait for the Miss Universe contest to start and see her rocking the Miss Universe stage.

All the best to Urvashi Rautela!